OK
OK
Something went wrong, please start again.
OK
If you wish to change your selection, you will need to start the package again. Would you like to restart your select for all items in the package, or continue with the currently selected options?
Restart Continue
OK

698 Osborne St, Winnipeg, MB R3L 2B9
Please be aware that the system is unable to assign all the seats you have requested together in a single row.
OK 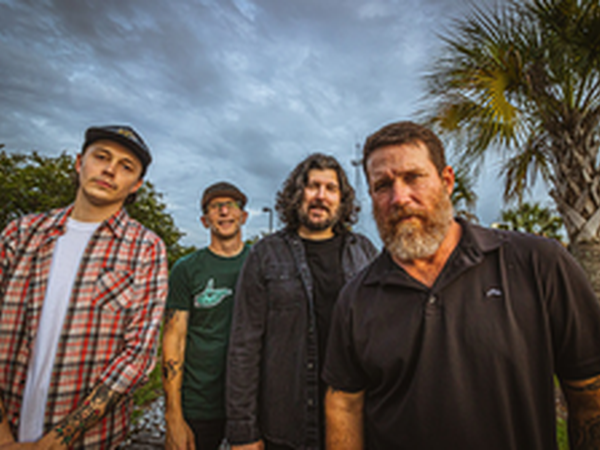 With Screaming at Traffic & Dinner Club

8 Max Ticket Limit
Accounts found in violation of the posted ticket limit may be cancelled without notice. 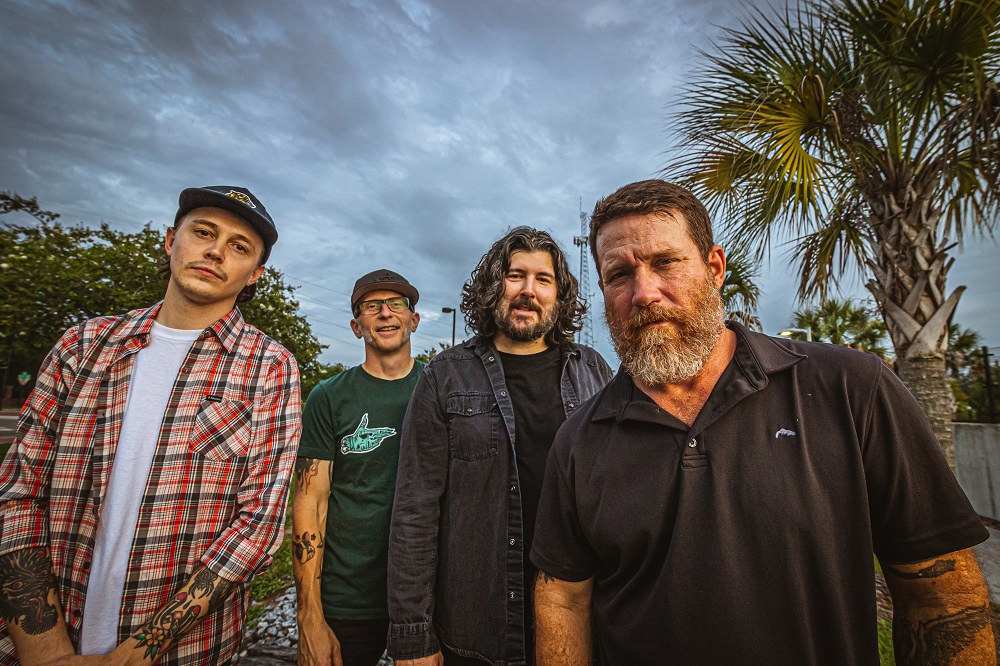 In 2017, Hot Water Music vocalist/guitarist Chris Wollard stepped away from playing live with the band in order to focus on his mental health. While the other members – Chuck Ragan (vocals/guitar), Jason Black (bass) and George Rebelo (drums) – understood and supported his decision, it did nevertheless bring the future of the band into question. Already booked to play The Fest that year when Wollard made his decision, they were considering doing so as a three- piece and questioning what would happen after. A chance encounter between drummer George Rebelo and The Flatliners’ Chris Cresswell, however, ended up with Cresswell stepping into Wollard’s shoes at the last minute. Nobody knew it would be the start of something very special indeed.

“I remember looking over,” says Ragan about that show, “and Wollard’s not there, which hung me up. But at the same time, here was this absurdly talented guitar player and vocalist, this wonderful human being, in Wollard’s spot. And it filled me up all over again. It was the strangest feeling, where I turned my head and felt confused and upset that my brother’s not there, but at the same time I was getting filled back up that this brother’s there. It was a rollercoaster, but I can honestly say that if it wasn’t for Cresswell stepping in to do what he’s been doing since October 2017, I don’t believe I would still be doing it.”

“It was pretty surreal, to be honest,” chuckles Cresswell. “As a longtime fan of the band, just The Flatliners getting to play shows and tour with Hot Water Music over the years was already a special enough. So getting to play with a band I love was incredible, and after that, to then start the conversation of writing music and the band having a fifth member for the first time in 27 years was intense. But it was beautiful.”

That’s also the word Ragan uses to describe it. After that Fest date, Cresswell joined Hot Water Music on a number of subsequent tours and played on the band’s 2019 EP, Shake Up The Shadows. When the band decided to write what would become Feel The Void, there was no question that he should be involved in the process. He already felt like family to the others, but it still took some coaxing, but unlike when they tried before, this time they convinced him.

“After a lot of asking,” Ragan remembers, “we twisted his arm and convinced him to sing some backups on Shake Up The Shadows. But when this record came around, it was crucial to me that we have him involved in a more meaningful way. I really wanted him to write and to be an equal part of the whole mix. And the way that it all unfolded and came together so organically – the way everybody was just on the same page – was a beautiful thing. But I had a feeling it was going to go well from all the time we’d spent on the road with him. We loved his energy and his ideas – even when it came to playing songs that had existed for a long time. He definitely ignited something in the band that had maybe been lost, or just dormant, for a while.”

Whatever that something is, there’s no doubt you can hear it in full force on these 12 energetic, impassioned songs. From the moment the dark, portentous intensity of “Another Breath” kicks the record off, it’s clear that this is a band at the peak of their powers. Written collaboratively but remotely, the album offers a torrent of resilience, songs which strive for light in the context of personal and global darkness. Recorded at Black Bear Studios in Gainesville, FL, Feel The Void also saw the return of Brian McTernan – who worked with the band on 2001’s A Flight And A Crash, 2002’s Caution and 2004’s The New What Next, often thought of as Hot Water Music’s classic period – to the producer’s chair. “It was,” says Ragan warmly, “almost like a little family reunion.”

It’s no coincidence, then, that there are many moments here that sound like classic Hot Water Music. In fact, McTernan’s involvement was incredibly instrumental in channeling that spirit and energy – the intense urgency of “Killing Time, “Newtown Scraper” and “Scratch On,” the nervous but positive emotional energy of “Hearts Stay Full” and the title track, the soaring chorus of “The Weeds,” the surging, powerful roar of closer “Lock Up.” Having not done so on record for a while, Wollard and Ragan are singing dual vocals again – and to devastating effect – something that should definitely please longtime fans of the band. Yet these aren’t songs that just recall the glories of the past with a fervent zeal. They also add a brand new dynamic to the band – just listen to the shimmering, spiky vitality of “Collect Your Things And Run” or the bristling, angular effervescence of “Turn The Dial,” which sees Cresswell on lead vocal duties. It all combines, sonically, to create something that’s exciting and inspired, true to the melodically ragged punk that’s been at the core of Hot Water Music since they released their debut album, Fuel For The Hate Game, in 1997, but also renewed and re-energized. Still at the core of it all, though, says Ragan, is the rhythm section of Rebello and Black, whose synergy is as strong and inspiring as it’s ever been.

“To me,” Ragan says, “they’re just the absolute best on the planet. They just have a language where they don’t really speak to each other – they nod, they wink, they shake their heads. It’s remarkable. Every session I’ve see them work together in has amazed me, and this one took the cake.”

Interestingly, at the same time, there’s an extra layer of vulnerability present thematically on this record, one that reflects the sad and broken times we find ourselves in. That manifests itself most obviously in the melancholic chug of “Ride High,” but also in “Habitual.” Perhaps the most personal song Ragan has written, it’s for and about those close to him who have suffered with, or succumbed to, cancer. It is, says Cresswell, the song that captures the essence of this record, the song that precisely sums up who and what Hot Water Music is in 2021.

“The first lyric in the chorus is ‘I hope you die’,” says Cresswell, “but Chuck is speaking to a cancer. So it’s an attack on the cancer, which means there’s a ray of hope and a light at the end of the tunnel for the person or the people who we’re hoping, by the end of the song, are survivors instead of victims.”

“That song was very important,” says Ragan. “It’s very heavy and it’s written from the perspective of someone battling cancer. I feel like I’m at that age where there’s just been so many people affected by it – family, friends, loved ones, acquaintances, my damn dogs. It’s everywhere, and it’s exhausting and it’s heartbreaking. But the song is very much about just the fight, and using that will to carry on, and using whatever it is that’s inside us that obviously has the power to heal.”

Ultimately, it’s that spirit of perseverance, defiance and hope that defines this record, and which also demonstrates how steadfast Hot Water Music has remained in its beliefs and ideas. The world might have changed drastically in the past 25 or so years, but the reason why the band makes music has remained exactly the same as it ever was. What’s more, that music is just as powerful, vital and full of meaning as it ever was, and just as effective at counteracting the emptiness, pain and suffering that, sadly, is an inherent part of life.

“This is so much more than just a band,” says Ragan. “A lot of people understood a long time ago that we, the band, used Hot Water Music as a vehicle for our own therapy, to help get over these barriers and be able to continue when we’re feeling at our lowest, or feeling like the rest of the world is against us. Years ago, that was the choice that we made as a band – that it’s not about being popular or making money or seeing your name on a marquee. This is a way for us to release all this angst and inspiration and positivity, and share music that drives us to become better people, better friends and better communities. It literally started with four of us, and over the years it became so much more than just a band – and I’m just so incredibly honored to be a piece of this puzzle.”

It seems you already have an order in-progress. Please finish or cancel your existing order before starting a new order.

Your order is already cancelled.
Close
Sorry, your session has expired.
Restart
You need to enabled Cookie to purchase ticket online